Much has been said about the baby-snatching witch and the ominous Black Phillip (a goat that may or may not be a stand in for Lucifer), but the most chilling image in The Witch is that of the woods. Having been banished from the village, a family sets out into the wilderness of the unknown. They join hands and pray for a safe journey, unaware that they are embracing the very fear that will soon beset them. A screech of violins looms in the background, infused with the blood-curling moans of sirens as the camera zooms in on the nearby tree-line. We might as well be staring into the gates of Hell. Even more foreboding, perhaps we are.

Early on, The Witch establishes an atmosphere of dread so thick that it’s almost suffocating (the aforementioned score plays a key role in this). Even more astonishing is how well the film manages to sustain it. First-time director Robert Eggers keeps the camera locked in place, never toying with the frame unless he can’t help it. He utilizes tight close-ups and claustrophobic angles that confine us in the horror. And the film, captured in the stark beauty of natural light, is a grim visual to behold. You can feel the absence of joy, or more appropriately, the absence of God.

Set in the Puritan days of Colonial America, everyone in the film speaks in archaic tongue and can recite passages from the Bible. The film makes subtle references here and there. There’s a lot of fuss regarding a missing silver cup (the Holy Grail perhaps?). And, in one of the film’s more unnerving scenes, a boy literally coughs up a shiny apple (original sin, anyone?). The word of God is rooted in the very fabric of these characters, but the most unsettling part about the film is how God is entirely absent from the narrative. Not once does he manifest nor intervene. It is the devil who shows up, the sultry form of the witch being one among many. It could hide in the loving arms of a mother; in the empty promises of a father; or mask itself in a harmless hare. The devil, as they say, is in the details.

The family, led by William and Katherine, both of whom are Game of Thrones alums (go figure), strive to stay in the light of the Lord even as their circumstances become increasingly morbid. Thomasin play a harmless game of peek-a-boo with her baby brother Samuel. Spoiler alert: Samuel wins. This happens within the first 10 minutes of the film and from then on the family is gradually consumed by evil, both in and out of their camp.

Caleb, a poor lad who can’t help but notice his sister Thomasin’s growing bosom, is wracked with the shame of his incestuous temptation. William, too, is blinded by his own pride to reap and sow the prison that he himself put them in. And Katherine, despite losing one child, is all but ready to give up her daughter if it means an end to their isolation. Thomasin, played by the luminous Anya Taylor-Joy, is blossoming in ways she couldn’t possibly imagine. But instead of receiving guidance, she is told that her body, and her femininity, is something to be feared. Sure, the witch is terrifying in her own right, but the chokehold men have upon women is equally horrific. Because in the Puritan world, it is the woman’s duty to shield herself from the male gaze rather than it being man’s duty to control himself. Such moral hypocrisy is what led to the demonization of the female body. Thus, it seems inevitable that man gave birth to the myth of the witch. It’s only fitting, then, that the witch is both the rotting source of their fears and the root of their damnation.

The Witch is not a movie for everyone, as proven by its polarizing response from audiences thus far. It has been labeled as art-house horror, but that is a misnomer. The film is artful, but it uses an old-school technique: the slow build-up of tension and atmosphere. Despite being a modern release, the film bears no resemblance to modern horror movies like The Conjuring, Insidious, and Paranormal Activity. On the contrary, it has more in common with films like The Shining and Rosemary’s Baby. This is not a movie with moment-to-moment scares. Patient viewers will be rewarded by its execution. Others will be annoyed by its ambivalence. I myself was momentarily spellbound until the credits rolled and I was confident (or perhaps naive) in thinking I’d get a good night’s sleep. It was only during the drive home and later recollections that same night that the film somehow got even scarier. The Witch contains some truly dark subtext, but it has even darker implications about the world we live in and the monsters we conjure up by campfire. It’s the reason why I’m typing this review while there’s still light out. Critics have crowned The Witch as the scariest movie in ages. Repeat viewings will reveal whether the film holds up. Problem is, I don’t think I have the courage to see it again. 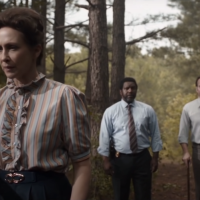