“Own that shit!” Harley Quinn chants. “Own it.” The squad spends some downtime at a bar. Naturally, things get personal. El Diablo, the last to reveal what he’s done, confesses his sins. The squad is startled to hear his story, that of a family he loved. A family he killed. Harley, dropping the glam and the hysteria, tells Diablo to own up to it. It’s part of him. He can either continue to hide it, or wear it on his sleeve. Suicide Squad wants to own up to its tagline (Worst. Heroes. Ever.) but seems terribly afraid of taking the plunge. It has all the right ingredients – a colorful canvas, a talented cast, and a bold premise. But the film cuts and runs from its own potential at nearly every turn. Perhaps Amanda Waller should’ve injected a nanite explosive in the film itself.

In bringing together Task Force X, Waller’s concern is whether these criminals will try to escape. My concern, however, is how Waller thought this was a good idea to begin with. Because in forming the squad, she manufactures the film’s main antagonist. Dr. Moone is initially recruited because Waller has leverage over her alter ego, Enchantress (the leverage being her heart, which Waller carries with her). But Enchantress has an agenda of her own; she goes rogue and summons her dormant brother to life (she has a brother?). The two then hold Midway City hostage, creating an army of faceless zombies and conjuring a machine that will decimate the world. Yes, I am still talking about the same movie. Waller’s quest is what initiates the conflict, so she can easily be construed as the villain. The film already has a villain problem. But this is a film full of villains, so where do I begin?

Writer-director David Ayer is interested in these characters as bad guys, but not what makes them characters. The film’s opening montage feature brief character dossiers: Deadshot is a hitman, Harley Quinn is crazy, Killer Croc is a monster, Captain Boomerang is a thief, and Diablo is a pyro. That’s about as much as we’ll ever learn about most of them. Not even leader Rick Flag is given much depth (he fell in love with Dr. Moone, but the film neither shows us how or why they fell in love so we neither want to know nor care). Ayer overcompensates by indulging in flashbacks galore, which hinders his own narrative. They either say too much or too little, ultimately failing his characters because he can’t internalize their past through the present action. Ayer, the guy who internalized the back-stories of four soldiers in the confined space of a tank (Fury), and characterized two cops in real time (End of Watch), is somehow out of his depth here. Squad has Ayer’s name written all over it yet none of his flourishes.

It can be argued that the structure of the film was meant to mirror the psyche of Harley Quinn but the film’s treatment of her is deplorable at best (as is the film’s treatment of women). She is hyper-sexualized even before she dons the booty shorts. The film accentuates the fact that she is often the only woman in the room, subjecting her to the male gaze. Margot Robbie takes advantage of her screen time and shines in exuding Harley’s maniacal enthusiasm. Whether you grew up watching the animated series that introduced Harley or take joy in casually cosplaying her, Robbie’s performance is undeniable. She nails the mannerisms, the wit, and the sass that made her such an iconic addition to the Batman lore. She brings so much levity to a film that slogs, a film that is surprisingly unwilling to follow her lead. Not only is that a huge letdown, the script, too, lets her down in the end.

For her, freedom means being with her puddin’ and nothing else. It’s the only thought that can liberate her. Nearly every scene with her references Mr. J or ends with a meditation on what it means to be in love. But like Rick Flag and Dr. Moone, the film doesn’t show how or why Harley fell for him, only that she does (Harley’s plunge into the vat of acid is beautifully rendered. It should’ve been the literal jumping off point for their tortured romance, but it isn’t). We know nothing about Dr. Harleen Quinzel nor the villainy that put Harley behind bars. Or the Joker, for that matter.

Towards the end of the film, Enchantress shows the squad their “heart’s desire.” Harley envisions herself living a quiet life. A home in the suburbs with two kids, along with the Joker. Except he’s not the Joker. And she’s not Harley. Makeup gone, they look like a regular household. That’s all she really wants – a family. I have no problem with this because it’s a perfectly normal thing to desire. But I do have a problem with making Harley nothing more than a cheerleader texting her jock-boyfriend. There’s so much more to Harley. The film settles for her simply being the Joker’s girlfriend. 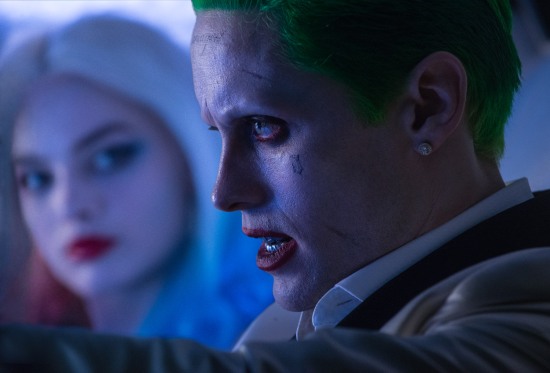 For all of the reports on Jared Leto going full method, the Joker is not in the film enough to leave a lasting impression (the soundtrack undercuts Leto’s performance because there’s always music playing in the few scenes he has). The Joker is only in the film because Harley’s in it. Their shared scenes are admittedly intoxicating, but his love for her is puzzling. He pushes her out of a falling helicopter to save her, but he also abandoned her after a run-in with the Caped Crusader, leaving her to be captured, which is why she was in Belle Reve Penetentiary to begin with. Theirs is a twisted love story, to be sure. I just wish we had more context.

Deadshot is the one person that the film doesn’t fail. Frankly, the film should’ve been titled Deadshot: featuring the Suicide Squad. This is really Will Smith’s movie, which is a testament to the guy’s charisma even when the film requires him to wear a mask. He bleeds charm and conviction, and it shows once he becomes the film’s only redeeming quality. Because he, for all of his villainy, is just a father who wants to take care of his daughter. If the role had been miscast, this would’ve come off as extremely one-dimensional. But with Will Smith there’s nuance and plenty of vulnerability. He has quite a few emotional beats in the film, and all of them had me tearing up. Smith may be in a bad film, but he doesn’t give a bad performance. A solo Deadshot movie could very well be right around the corner.

Squad suffers from the same root problem as Batman v Superman: a lackluster script. The film has no discernible structure either (BvS at least had one). The script is woefully counterproductive. It throws in an antagonist without building up the threat; rounds up all these characters yet defines only a fraction of them; and teases a deeply interconnected universe but ultimately plays in the shallow end. Squad is so caught up in wanting to be bad that it is. Unequivocally, irreparably bad. I’d forgive its plot holes and its unbearably cheesy villain if the movie owned it, ran with it, went for broke. It certainly runs, but in the other direction. I wanted to love the film. I tried so hard to like it. I ended up with neither.

There are always two sides to every story. If the reports are to be believed, the studio did some serious trimming after the tepid response to BvS. Ayer had the decency to own up to it. A good film, or at least a coherent one, might have gotten lost in the shuffle. Here’s hoping for an ultimate edition.