The most disturbing moment in Joker for me by far, is the scene that follows the subway murders. Arthur locks himself in a public bathroom, looks at both himself and what he’s done in the mirror then starts to… dance. Violence brings Arthur such unspeakable power (perhaps even joy) and the only way he can express that release of emotion is by waltzing with himself like one would in, say, a vaudeville musical. It’s a disturbing portrait of nihilism, narcissism, and psychopathy that I couldn’t stomach.

Which is to say I admired and reviled Joker, was awestruck by it as often as I was squirming in my seat. I can think of no higher praise for a.) an origin story about the clown prince of crime, and b.) a movie directed by Todd Phillips.

I’m late to this party (though for the record, I’m late to every party) so there’s nothing new I can say about Joker that hasn’t already been said, pull-quoted, or memed to death. But there’s so much to take stock of Joker that at the very least the film merits a conversation no matter where you land on the spectrum.

As far as those who hail the film as a masterpiece and those who think the film will spark real-life violence, I’m somewhere north of neutral. I doubt Library of Congress will select Joker for preservation, nor is Joker any more capable of inciting bad behavior than a movie like Ted.

I think Joker is a case of a great performance, and an alright movie. 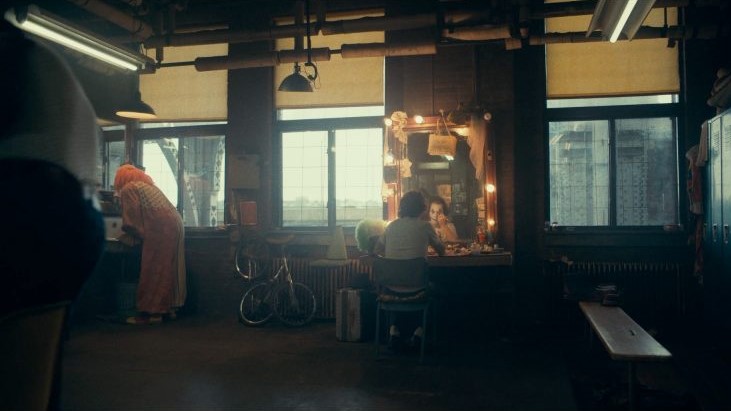 Before you furiously type your reply telling me my opinion is wrong, just know that I’m writing this in general praise. That I’m going through the trouble of processing my thoughts surely means I care? (I’m of the belief that it’s possible to admire something and still have a complicated opinion. Binary thinking is boring anyhow.) No, I didn’t capital-L love Joker, but I still think the film is a ballsy entry in the comic book canon.

I’ll say this of director Todd Phillips: he was definitely inspired by his leading man. Phillips shows surprising restraint in Joker by allowing Joaquin Phoenix to do his thing. The very first scene, Phillips pulls a dolly shot and a stark close-up that probes his subject as much as it makes us wary to get any closer. Nothing is said in the first few minutes save for ramblings on the radio and the looming exterior of an oppressive city. The effect is so subtle I had to remind myself this was the guy who directed The Hangover, Old School, and Road Trip.

Instead of throwing Joker into a vat of acid, Phillips says fuck it and throws him into society. Phoenix is immediately and morbidly captivating as the shrunken Arthur Fleck, pulling apart the edges of his mouth to force a smile he otherwise can’t show. We know this guy is damaged without needing a forehead tattoo to exaggerate it. Arthur suffers from what appears to be the Pseudobulbar affect – a condition marked by hysterical, inappropriate laughter. Arthur, as a whole, is a walking tear-stain of a human being— though the human part is starting to crumble. 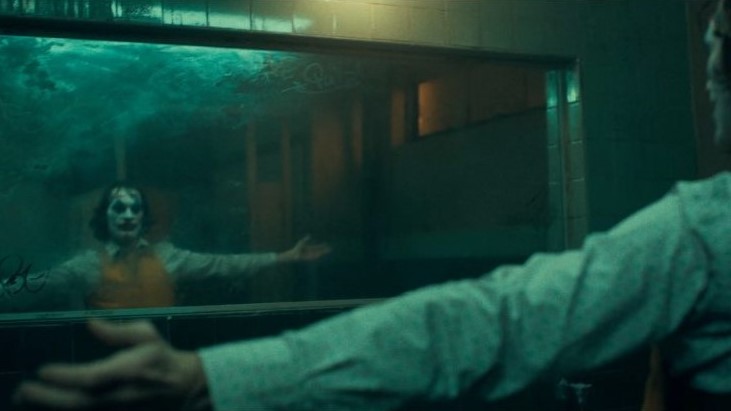 He has ambitions of becoming a superstar comedian like his talk-show idol Murray Franklin. Naturally, Arthur spends some downtime at a comedy club – an attempt to come up with material for his own set, but also a chance to study what’s “funny.” Because he’s clueless on the subject and not a particularly funny guy. Observing one comic, Arthur laughs at everything but the punchline, missing the wave of audience cheer each time. You can never tell if Arthur is laughing to fit in or just crying for help, and that’s likely the point.

Phoenix eschews so much substance out of Arthur’s post-traumatic mental state. (His master class, however, is in Lynne Ramsay’s You Were Never Really Here, but that’s a piece for another time.) It’s funny to Arthur to point a gun at himself, to imagine blowing his brains out on live television; to willingly commit acts of violence, murder, and retribution. He processes things differently due to profound trauma suffered in his youth that inevitably shapes what he’ll become.

These long, lingering looks at Arthur’s slow and pitiful decline borders on something, dare I say, artful. It’s when Todd Phillips needs to move the plot along or nudge Arthur’s transformation that undercuts the grasps at subtlety. Phillips also co-wrote the movie. We’re handed essentially 2 hours to witness a Greek tragedy, so it’s a bummer that the film sticks tooth and nail to its origin story structure—which functions more like narrative trappings. Arthur feels dangerous moment to moment, but some of the film’s emotional beats are rather predictable. 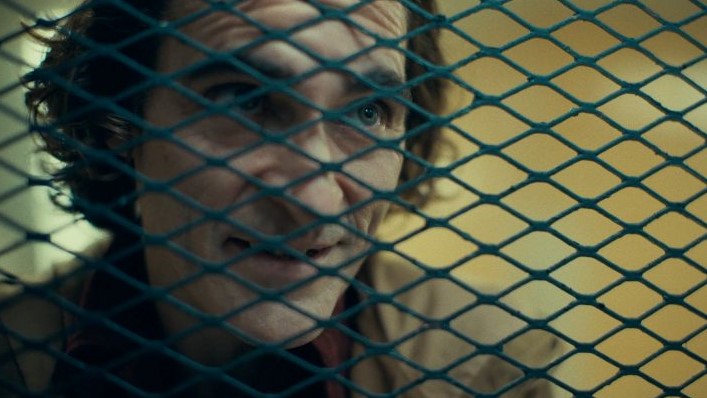 Perhaps it’s because there’s not much to Arthur at the end of this manic rainbow. His trauma, admittedly, sets up an interesting mirror to Batman’s own origin story. Both suffered traumatic childhood events, both adopt masks to set themselves free, but one is celebrated as a hero while the other is reviled as a villain. Of course, we know the answer to the riddle because chaos and violence is the point for the Joker, whereas for Batman violence is a means to achieve order in a chaotic world. But that the grand and complex equation to Arthur is simplified by childhood trauma feels too easy for the Joker’s own good, or bad. (Joker is A LOT like the mainstream studio version of You Were Never Really Here.)

The problem is that Phillips leans too heavily on both audience expectation and Arthur’s predetermined trajectory. We know he’s bound to escalate and commit violence, so he does. Which is why the subway murders – as shocking as they are in that it happens so early on – ultimately rings hollow. There was no buildup to Arthur or what he might be capable of. His circumstances suck but, hey, get in line. Not all of us who were abused as kids go on to flirt with gun violence when we get older. I don’t mind that Arthur defends himself from 3 rich douchebags on the train. I do mind that Arthur guns down the last man standing like he’s suddenly a cold-blooded murderer.

I could do without the newspaper clippings; I would’ve killed to see the warning signs of Arthur’s psychosis. Did he try to kill animals as a kid? Does he fixate longingly on domestic disputes heard in his apartment building? Does he identify with neglected children? Is he thrilled by changing power dynamics? Where Batman fights criminals in a symbolic attempt to save his parents, would the Joker’s act of killing represent some demented satisfaction in murdering his mother’s abusive boyfriend each time? The best villains, after all, are the ones who see themselves as heroes. That tragedy is a staple of modern comic book villains, but the never-ending allure of the Joker is how darkly comic that twist can be when you’ve got the ego and charisma to boot i.e. Jack Nicholson and Heath Ledger. (Consider how the origins of Ledger’s Joker can’t be interpreted by a singular traumatic event, but the possibility of many – whether he’s joking or not.) 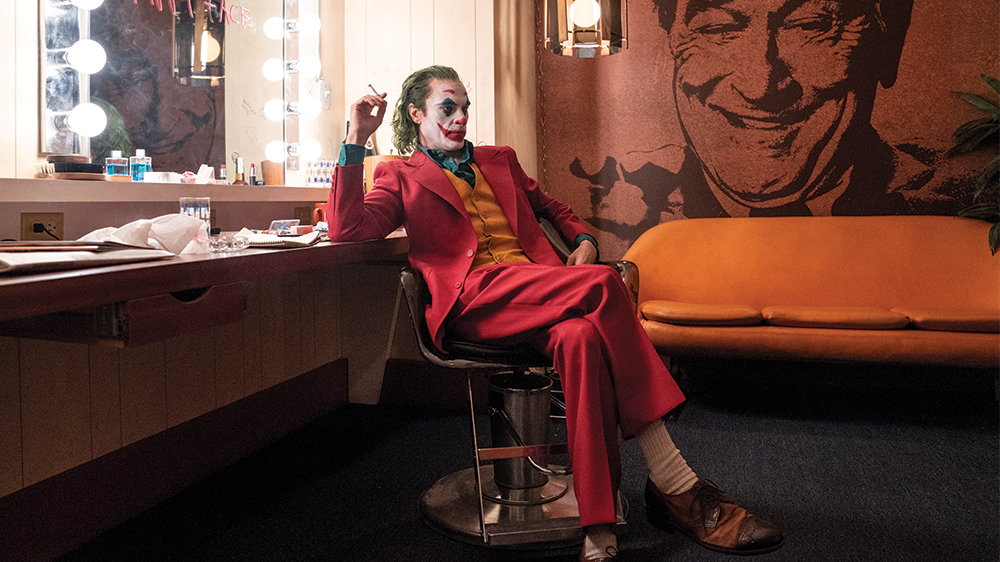 These questions might oversimplify Arthur, too, but I’d rather go through the messy truths of Arthur’s past interacting with his present than to see the plot conveniently mold its way around him. Halfway through the movie, Arthur manages to sneak past a wall of security to confront a would-be father figure; in the scene that follows, Arthur’s mother suffers a stroke. Some of the film’s sequencing feels more rushed than dramatized, the reveals not at all that revealing, and the two serve to accelerate Arthur’s descent down a black hole. Why should the movie force anything when we’ve got 2 whole hours to witness Arthur’s fall and rise? (Humble brag: Lynne Ramsay does this in a crisp 90 minutes.)

Phillips is sometimes so heavy handed that it feels like he’s writing with a sledgehammer. Those pesky youth who steal Arthur’s sign at the beginning seem to only do so because KIDS THESE DAYS. Or citizens are taking to the streets in the aftermath of the yuppie subway murders because CIVIL UNREST. And because this is Gotham and we’re also dealing with the uber-rich Wayne family, the city is divided into nothing more than HAVES and the HAVE NOTS. The film, too, comes weaponized with ham-twisted jokes: Arthur’s big coming out moment is set to “Rock and Roll Part 2” by artist and convicted pedophile, Gary Glitter. It’s less a clever choice than it is just… so… depraved, which suits the Joker just fine.

The inclusion of the Waynes achieve Phillips’ intended themes of violent retribution, while also layering how intertwined Batman and Joker’s destinies are. But I almost wanted to forget that Arthur’s fate was to become the Joker because what Joaquin Phoenix creates is so intoxicating and original. Philips’ direction is arresting when he and cinematographer Larry Sher are in awe of Phoenix’s physical strokes with the character. Like when Arthur is in his apartment and lost in a delusion, his protruding ribcage like broken wings, or Arthur miming to himself moments before his intro to a live audience, arms outstretched and twirling like he’s in a musical where only he can hear the music. He’s far, far away, and that’s wholly unsettling when you remember he’s got a gun in his jacket. 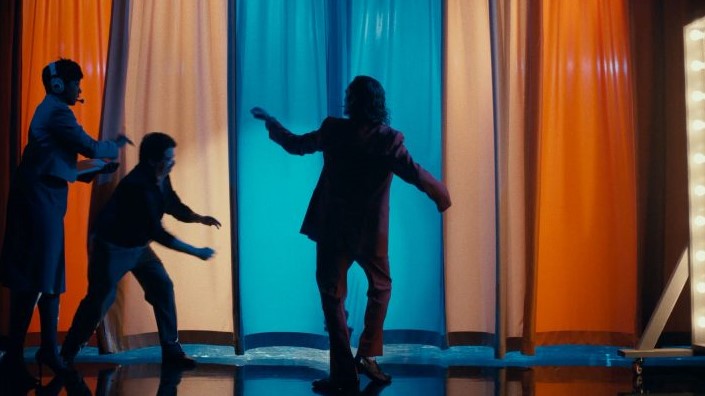 This isn’t me dunking on Todd Phillips as inept because I otherwise am on board with his vision of giving a villain the same treatment we give anyone donning a cape or spandex. Yes, Phillips is deliberately aping Scorsese’s King of Comedy and Taxi Driver to such an extent that Scorsese ought to get a royalty check. That Scorsese-alum Robert De Niro is in the film is of course no coincidence. Some of the best comic book films wrap their sensibilities around a parent genre classic i.e. Robert Redford from All the President’s Men playing a pivotal role in Captain America: The Winter Soldier, or The Dark Knight director Christopher Nolan sneaking in a Heat cameo and visual references galore into his epic city-crime caper. If you’re gonna steal from someone, why not steal from the best?

Despite the knee-jerk sound bites during Joker’s press tour, this is exciting new territory for Todd Phillips. Following the mainstream success of his rat-pack comedies, his films grew rapidly darker in tone that Joker feels like a natural progression and a bold frontier. (Let’s just thank god he’s not in Vegas anymore.) Phillips accomplishes enough with Joker that I, as a fevered film dork and comic book fan, was left wanting more— and that’s a more promising scenario than the alternative.

I love that Phillips essentially used his studio pitch as a Trojan horse for doing something darker and more audacious than the competition. Joker comes across like an undue gut-check for a genre that will only become more insufferable in the wake of Endgame’s $2 billion success, where other studios will be quick throw big budget numbers at any comic book property as we head into the next decade of film. Joker’s billion dollar run certainly has everyone’s attention too.

Phillips makes a strong case for the increasingly endangered species that is the middle-budget movie: that you don’t need carte blanche or an insane effects budget to make a movie worth seeing. Sometimes, you just need the right actor. 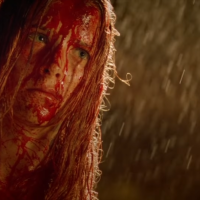