I knew Chadwick Boseman was a bona fide star after his brief but savory introduction in Captain America: Civil War. Consider the challenge he’s posed as an actor just joining the fray of the MCU. He dons the Black Panther suit in the space of 3 scenes, but before he does, he has to prove he can wear the superhero get-up and do so convincingly.

This is more than a case of an actor walking into a phone booth and then WHOOSH they’re a Superhero! It takes months of auditions and testing to find the right Superman or the next Batman; less about form-fitting and more about presence, or what casting directors call “gravitas.” Not a lot of actors have it while wearing the tights.

This is easier to understand in cases where the superhero role didn’t exactly work out. Like Ioan Gruffudd as Mr. Fantastic, or Jessica Alba as Sue Storm. (Look, I was obsessed with Alba in high school, too, but she is NOT a convincing superhero.) This was also true for Ryan Reynolds’ first superhero outing as the miscast Green Lantern. (Reynolds works better as a satirical superhero in Deadpool over a sincere one.) Even a veteran actor like Edward Norton couldn’t quite sell a brief stint as Bruce Banner, where the transitions from Banner to Hulk were never seamless.

Playing a superhero is a tall order that not every actor can meet regardless of their extensive résumés or how broad their shoulders are.

Chadwick Boseman, however, made this shit look easy.

We meet T’Challa in Civil War as the young and regal prince poised to stand where his father is at the head of a nation, the dutiful son who wants to do right by his father. And then all too quickly, T’Challa has his superhero origin moment. He loses a parent.

It’s the same trauma that defines Bruce Wayne and Peter Parker, trials that steel characters in comic books to put on the costume and dole out justice on the streets. But whereas Bruce Wayne and Peter Parker get an entire first act to sell this pivotal moment, Boseman has less minutes and fewer lines to pull this off in a film that’s far bigger than any one character.

Boseman, nonetheless, owns this scene opposite Scarlett Johansson, a veteran in the Marvel films. He’s distraught, despondent, and rage-driven all in a single compelling stare, and he barely raises his voice. His transformation is complete minutes later following the breakneck chase with Bucky and Captain America – T’Challa removing the cowl in a momentous reveal like a pseudo-birth for the Black Panther. Civil War may be a “Captain America” movie that’s really a crucial Avengers chapter, but it’s also a slick Black Panther origin story. (Not bad for a movie simultaneously introducing Spider-Man.)

T’Challa’s blinding quest to avenge his father underscores the film’s true villain in Helmut Zemo and HIS revenge odyssey, and this teaches T’Challa the lesson of Uncle Ben’s iconic superhero proverb: “With great power, comes great responsibility.” It’s a maxim taken to the utmost extreme in Civil War’s larger conflict of oversight and collateral damage, but it’s also an inner revelation that teaches T’Challa the strength of humility against the backdrop of superheroes punching their way out of an ideological divide.

Imagine that, Civil War is not Black Panther’s movie, but he walks away with the film’s beating heart. In fact, he’s the one who captures Zemo in the end.

It’s been a month since Chadwick Boseman’s passing and the news still rings cruel and untrue. How could he be gone when he brought so much to the screen and meant so much more to communities all over and opened all kinds of imaginative doors? Here was this comic book craze taken to the biggest and grandest form imaginable via the MCU, a super-franchise that was beginning to embrace the storytelling potential of a diverse world— the same world that its heroes save in practically every other movie. It felt like Boseman was just getting started both in the MCU and as an actor further carving out a versatile body of work. It’s not just the promise of what could’ve been that devastates, but the lasting sheen of an artist who made such a tremendous impact.

Mourning a celebrity may be laughable to some, but I think grief is the truest response we can give as fans. Movies are larger than life, and we often idolize the faces projected as enormous Greek gods before us. Artists get together to rehearse, dress up, and play make believe in front of a camera, and that painstaking process has one simple function in the din of the theater – to impart feeling. If art is an expression of the soul, then it’s no wonder we feel so deeply when we engage with it. I don’t think it’s naïve to form an attachment to a writer, a director, or an actor; it’s a natural progression of the relationship we have with stories and the people who make them.

The first celebrity I mourned was Bruce Lee. It felt so cruel to watch Enter the Dragon, to become obsessed with an Asian superstar whom my cousins and I likened to a superhero— who whooped so much ass and whose flying kick to the big baddie at the end was so freakin’ EPIC. We often reenacted those same moves and sequences as kids, mimicking his stance, his bravado, his chi.

And to then learn that Enter the Dragon was in fact Bruce Lee’s last movie; it was heartbreaking to grow up idolizing someone who was gone long before you ever had the chance to see or meet them in real life. (I felt that same crushing feeling when I later became obsessed with his son Brandon Lee in The Crow, and then finding out what happened to him in the middle of filming.)

I can’t fault or make fun of kids for dedicating their own memorials and tributes to Chadwick Boseman because I was those kids, and in many ways I still am. You become invested in a fiction, in a character— someone who makes you believe in a story and a world so far beyond the limits of your own. And to see yourself on screen before you know how to articulate that sensation, it validates your wondrous place in the world; that no matter how shitty or small or overlooked you might feel, by some miracle, you belong.

That feeling like anything is possible was everything to me as a kid. That’s why I can’t help but tear up seeing parents posting pictures of their kids dressed as Black Panther and posing in Wakandan salute, or families re-sharing stories of getting to meet Chadwick in person. Black Panther is just a character, a comic book. But he made kids believe that Black Panther was real.

Arriving at 2018’s Black Panther felt more like a celebration than another Marvel movie added to the roster. And it was a relief that it was treated as such, as a conscious nod to the cultures and influence of the larger African diaspora and upending all notions of a third-world “shithole” country by literally presenting Wakanda as a thriving Afrofuturistic society.

You can tell Chadwick relished this opportunity to play toward themes of cultural responsibility because the role bore its own responsibility. Black Panther had to be a moment; it had to matter beyond a brand or an interconnected universe.

That’s the exact message put forth in the film’s rousing mid-credits scene, which takes Tony Stark’s famous “I am Iron Man” ending coda and does one better. Rather than profess himself as the hero, T’Challa announces an end to Wakanda’s exclusionism and promises to open its doors to the world— like a hand extended to every kid who dressed up as their favorite superhero regardless of the color of their skin. This wasn’t just a “version” of a superhero that pandered to them, but instead reassured them that this whole superhero thing was theirs too. “Can you believe it?” Killmonger says, “a kid from Oakland running around believing in fairy tales?” We can, thankfully, as more of us can own and lay claim to it, finally.

Regardless of whether this matters to you personally, it’s hard to argue that it doesn’t for so many others. I still remember going to see Infinity War – a film chock full of crowd-pleasing moments. The volume of cheers that came when the film brought us back to Wakanda (mere months after Black Panther came out) was nothing short of astounding. Maybe I’m too subjective or too emotional a viewer to comment on this, but I think this mattered a great deal to people.

Chadwick’s latest film, Da 5 Bloods, serves as an unintended tribute to a man who became larger than life, whose career carved out its own legend on the big screen. Boseman plays Stormin’ Norman – the fallen leader of the “Bloods” with ferocity and prophetic swagger to spare. Norman’s ghost looms large over the returning veterans as they retread the Vietnam jungle in search of lost gold. Norman was the one who spearheaded the mission, who was committed to smuggling the cache out of Vietnam and give back to their fallen brothers and sisters as long overdue reparations for being black in America. 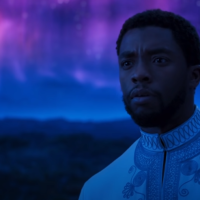