“Did you know there are more people with genius IQs living in China than there are people of any kind living in the United States?”

The first line of David Fincher’s The Social Network starts at the 16 second mark, just as the Columbia Pictures logo rolls, and just as we slowly fade into the middle of Mark Zuckerberg and Erica Albright’s whirlwind date. (Whirlwind as in the speed at which they talk, NOT that they’re “in love.”) Where are we? In a bar. When are we? Boston 2003, at the intersection of Harvard and – as far as the tech-wunderkind Zuckerberg is concerned – the rest of the world.

The thing about Mark is that he’s never not talking about himself, which Erica is more than aware of on what we assume to be a 2nd or 3rd date that won’t survive to a 4th. Aaron Sorkin’s script reads of Erica’s character: At this point in the conversation she already knows that she’d rather not be there and her politeness is about to be tested.

This is how Fincher’s film about the founding of Facebook begins, not with a computer, not with Zuckerberg’s birth and upbringing, nor how he and co-founder Eduardo Saverin first met – the central relationship at the film’s core. The Social Network starts with a breakup. In Fincher’s capable hands, with Sorkin’s whip-smart script, the ensuing breakup has all the pacing of a Formula 1 race or an action-packed James Bond intro. Instead of cars and bullets and bad guys flying, its words and cold hard truth whizzing by in the form of swift verbal jousting.

If Social Network is a long-form essay on the character of Mark Zuckerberg, then this opening scene is the thesis statement.

This setup of two college students on a date tricks us into thinking we can ease into the seemingly easygoing chatter. But there is nothing easy about this conversation. The background ambience, too, of a bar mid-rush is pitched just as loud as Mark and Erica’s conversation, if not louder. Already Fincher is bidding us to pay attention to what’s happening, and especially to what’s NOT happening.

When Mark blazes past their banter about acapella groups and rowing crew then calls her delusional, she breaks away from his eyeline momentarily. Up until then, Erica maintains generous eye contact. After all, it’s a date; eye contact is a sign of interest. Here, Erica’s eyes waver briefly as if she just spun out of a race and is now frantically trying to catch up.

It’s our earliest clue that something is off, that we’re not witnessing the camaraderie between two star-crossed lovers, and especially that Erica is no longer impressed by Mark’s perfect SAT score.

There are dozens of nuances in the scene already, from the breakneck rhythm of Jesse Eisenberg’s dialogue right down to the fading gleam in Rooney Mara’s eyes. But we have to work to read between these lines because Fincher doesn’t bump up their mics nor does he cut to a closeup unless he can’t help it. This is all captured in wide over-the-shoulder shots – the cameras distanced how we would be on opposite sides of the table. The shots, too, aren’t all that different from each other. It’s the same setup and composition. What’s happening is on the actor’s faces, their brows, or the tiniest twitch of the mouth.

This is why Fincher’s films are fascinating to behold and addicting to revisit. Social Network’s opening scene alone is strapped with miniscule details that are easy to miss in a blink, and easier to overlook if you’re on your phone the whole time. As viewers, Fincher bestows us with the power to see or hear what other characters crucially miss. So it’s not just that you have to pay attention, but that it pays tremendously to pay attention.

If this were a Greek tragedy, then Mark’s ego is his Achilles’ heel. Getting into Harvard is a thing to be proud of, I’m sure. But in Mark’s mind, this entitles him to Erica’s undying affection. It’s a thing she owes, not something Mark has to earn by being sweet, charming, or funny— or at the very least, aware. Erica is getting visibly frustrated with a conversation that Mark is having all by himself. Mark, of course, only sees what he wants to see.

Erica is cordial enough to keep the conversation going, but her politeness is misinterpreted by Mark as the kind of worship that his genius craves. Because what good is all that intellect without an audience to be endlessly impressed by it. To Mark, the greatest crime of the universe is that girls should be lining up to party with him like he’s the next Fed Chairman but they aren’t. Which is why this discussion of final clubs comes loaded with all the pressure of back-to-back exams, because the right club will seemingly accomplish what Mark has desired all his life. Already he equates brilliance with success, and success with popularity.

Mark’s sin is pride; he feels he’s long overdue his credit in the form of an MTV Spring Break special. Erica’s sin is that she said yes to a date with this guy. 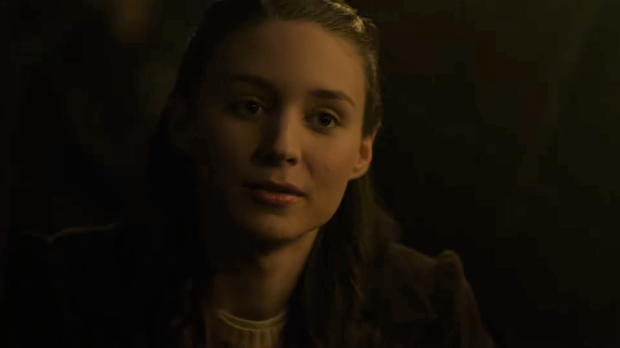 The next fracture in the conversation happens when Erica asks the harmless question of which final club is the easiest to get into, which bruises Mark’s ego— a self-inflicted wound. Erica was merely being curious. “I was asking to ask,” she says to him. In her mind, if she were to let him vent, maybe she can finally get a word in that isn’t predicated on what Mark wants to talk about. The difference is that Erica has manners and conversational etiquette, whereas Mark is blinded by self-importance and thus mistakes her curiosity for an insult.

“There are really more people in China with genius IQs than the entire population of—” Erica tries to carry on past the stumbling block. When Mark cuts her off like a jackass on the road, something critical happens in her eyes again, like the twinkle in her gaze is gone.

She’s holding on for dear life and lets out the most earned sigh in all of cinematic history as she says, “Which one?” But she’s not interested in knowing which Roosevelt belonged to which club. She asks out of obligation because she knows Mark will ramble on anyway and the illusion of their date will continue – an illusion Erica will opt out of completely. Because the opening tidbit about genius IQs in China was never a fun fact. It was yet another obnoxious reminder from Mark to Erica that he’s brilliant and goes to Harvard.

The sense of snobbery eventually lays itself bare:

“I want to be straightforward with you and tell you that I think you might want to be a little more supportive. If I get in… you’ll be meeting a lot of people you wouldn’t normally get to meet.”

If you’re not paying attention, this line probably reads as harmless as Erica asking which final club is the easiest to get into. If you are, then you know this reeks of Mark’s privilege. Erica should be supportive of what, a bus going around picking up girls for Mark and his elite tribe? And that if he gets in, she’ll get to take part as a lucky bystander – which isn’t THE reason but an added perk?

It’s the final cryptic insult that Erica can stomach. And then it happens before Mark registers that an implosion had been happening this whole time. 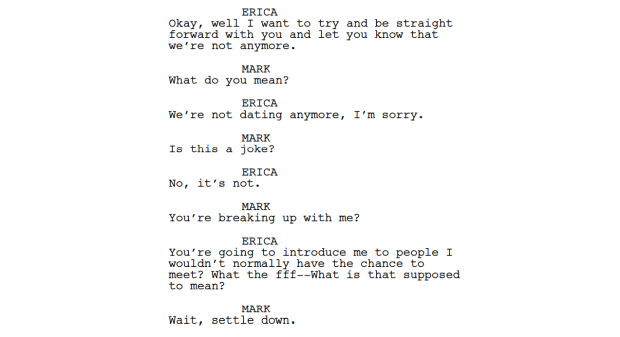 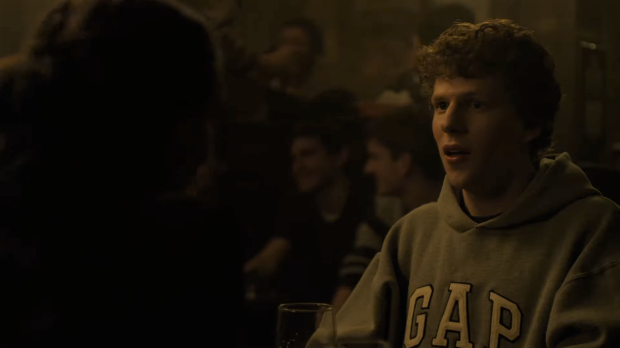 Everything stops for Mark. Only then does he at long last meet Erica on a singular topic. It’s finally about them, and now they’re done.

It’s the funniest line in the entire scene for me (well, right next to Erica’s eviscerating roast: “Dating you is like dating a Stairmaster”) because it never occurred to Mark that his masturbatory self-fixations might be considered unattractive to some people. Going to Harvard might be a nice pickup line, but it hardly lays the groundwork for a long-lasting relationship.

Things get very real for Mark over the course of the movie, and this 5-minute scene is a microcosm of the misogynistic rage that will flare up repeatedly, exponentially. Social Network is ultimately a breakup movie between best friends, but this opening effectively weaves the film’s brutal and underlying critique: that male greatness and ambition all too often come at a woman’s expense.

Isaac Newton came up with the laws of gravity when an apple fell on his head. Mark Zuckerberg will go on to become the world’s youngest billionaire *after he was dumped by the girl he felt entitled to.

A fuse has just been lit, Sorkin’s script reads of the scene’s end. It’s worth noting that Mark doesn’t come up with the idea for Facebook after he leaves the bar and embarks on that lonely trek across Harvard Square set to Trent Reznor & Atticus Ross’ seething, melancholy score. Because it’s not inspiration that spurs Mark’s genius into action. It’s revenge.

Before Facebook, Mark creates Facemash.com, a site where people rank the attractiveness of female undergrads.