For a director who’s made movies about psychotic killers, David Fincher crafts some relatively bloodless affairs. This speaks to his obsession with psyche and behavior over guts and gore, and somehow this makes his films creepier. Cinema has no shortage of psychopathic portrayals and this breed below ought to give Hannibal Lecter a run for his money.

The best detectives need wicked and elusive foes to make the cat-and-mouse game possible. It’s a vicious circle, and Fincher has had a hand in crafting some of the most grotesque personalities ever put to film. It’s no wonder Fincher would go on to do Mindhunter— a natural progression, really. He’s made a career out of probing the worst humanity has to offer, and these 5 characters provide for fascinating terrifying case studies.

*Sidenote: I’m using the term “psychopath” very broadly here. I’m well aware some traits of these characters align closer to sociopaths, but out of brevity’s sake, “psychopath” will be used as an umbrella term.

The fact that the character is played by Kevin Spacey is scary enough. John Doe, created by SE7EN-scribe Andrew Kevin Walker, was Fincher’s first stab at the psychopath and already he knocked it out of the park. Doe is essentially the shark from Jaws; we don’t see him until the final stretch of the movie, but his presence looms large over every frame. And his master plan – recreating the seven deadly sins through a series of murders, each one more heinous than the last – is all the more diabolical in that we never actually see Doe perform these hellish sermons. We only see the crime scenes after the fact, and the totality and scale of it all is felt with brute force by the end.

What we find when we finally meet John Doe isn’t the devil incarnate, but a man capable – a believer. Morgan Freeman’s Detective Somerset sums up the character best: “He is methodical, exacting, and above all patient.” If this was ever about winning, then Detectives Somerset and Mills never stood a chance. John Doe succeeds, his masterpiece is realized, and god help us all.

The Girl with the Dragon Tattoo’s game of whodunnit is perhaps the weakest in Fincher’s thrillers. The setup, fortunately, is redeemed by the eventual monster at the end of it – Henrik Vanger’s grandnephew Martin, played by Stellan Skarsgard who just oozes menace and sadism in perfect shadow. Daniel Craig’s Mikael Blomkvist is initially tasked with finding Henrik’s grandniece, Harriet. Blomkvist then enlists the help of Lisbeth Salander, and they uncover a trail of brutal murders leading all the way down to Martin’s basement.

What’s so disturbing about Martin is how little he actually shows of himself to the world. His see-through glass house IS the façade, and peeling away the layers we eventually see the fiend behind the mask but in the most miniscule of fragments. When he says to Blomkvist regarding Salander, “I can’t thank you enough for bringing her to me” with a near cannibalistic edge, and ESPECIALLY when he says almost whisper quiet: “We all have urges. Satisfying mine requires more towels.” Beneath the wealth and all that posturing is a devil in disguise worthy of a Thomas Harris novel. The best antagonists chew the scenery, and Stellan Skaarsgard had quite the appetite for this one.

Martin in Dragon Tattoo may be wearing a figurative mask, but Raoul’s calm and unflinching demeanor beneath a ski mask is somehow more chillingly effective to me. Panic Room cycles through two power changes amongst the three burglars breaking into Jodie Foster’s home. A corn-rowed Jared Leto is initially the head honcho in charge when it shifts to Forest Whitaker. Then the dynamic swings to Dwight Yoakam’s Raoul when it becomes clear more violent measures need to be taken.

Raoul is the only one psychologically prepared for the consequences of their actions, carrying out swift moments of violence with brutal and methodical precision. You get the sense that he’s killed and killed mercilessly before, and his one-note alias only adds to the shades of his ruthlessness. Even when his hand gets caught in the vault door, in which his mask literally comes off as he screams in guttural, comical agony (one of Panic Room’s few moments of respite from the high-wire tension), the peek at a real human being is all the more unsettling. Because now that he’s bled and his perfect composure has collapsed, there’s no telling how far he might return the favor. 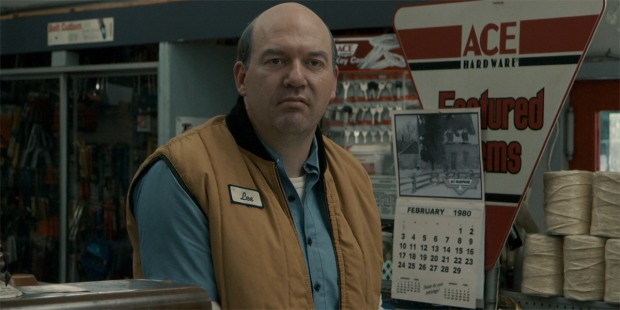 You might recognize John Carroll Lynch as that one dad, uncle, or dad’s/uncle’s coworker best friend. But he is a sorely underrated character actor. His performance as Arthur Leigh Allen is not just his best but his most understated performance. Lynch plays the man simultaneously like he is and isn’t the Zodiac. The killer was never formally caught, mind you, and the sprawling details of the investigation hardly paints a solid portrait, but a complicated one of whether the Zodiac is who he says he is, committed the sheer number of murders he claims he’s committed, or was some sicko who got off on manipulating public fear through taunts in the press. Fincher, too, complicates our intuition by having different actors perform each of the purported murders.

So when we arrive at Arthur Leigh Allen, the puzzle is once again thrown in disarray as he displays awkward and erratic behavior that immediately places him as the prime suspect, while later details come to light that just as easily absolve him. This interrogation scene just screams Mindhunter; it plays to Carroll Lynch’s strengths as an actor, as the cuddly and aloof bear he’s often typecast as, but with an air of something sinister lurking beneath. It’s his eyes that sell it— that ominous stare suggesting you might be right to implicate him AND warning you to tread lightly. Lynch may have the least amount of screen time amongst his psychotic peers on this list, but when he’s in the frame, excuse the pun, he kills it.

Of all the psychos in Fincher’s oeuvre, Gone Girl’s Amy Elliott Dunne is my favorite psycho-sociopath of all. (Using “favorite” very loosely here.) It helps that this monster was the brainchild of Gillian Flynn. Amy has the patience of John Doe, the surgical precision of Raoul, and eyes that would send a shiver down Zodiac’s spine. She only has one kill that we know of, but Amy’s creep factor goes beyond body count. She can do anything she sets her mind to; she just has to believe she’s been wronged, meaning there are no limits. Cross her and she’ll make your worst nightmares come true. She’s Amazing Amy in the fullest, most terrifying realization of the moniker.

Consider how she could’ve done literally anything else when she found out her husband was cheating on her. Key his car. Put him on blast on social media. Cheat on him right back. Or, and I’m just spit-balling here, just fucking LEAVE HIM, SIS. What does she do instead? She wants him sentenced to death for her FAKE disappearance. (What the hell happened to an eye for an eye?) Nick’s infidelity was just the lynchpin; his ultimate sin was that he turned out to be an assembly-line husband you’d see at Home Depot. It’s not jealousy that powers Amy, but resentment. Ex-boyfriend Tommy O’hara thought she was overbearing, so Amy had him accused of rape; Desi Collings tries to domesticate her, and Amy kills him. I pray for the barista who gets her order wrong. She, in other words, is the perfect cold-blooded specimen. Frankly, Amy has more in common with the Xenomorph from Alien than her counterparts on this list.

Amy may have been intended as a blunt instrument to deconstruct marriage and codependency by way of satire, but Gillian Flynn wrote a full-blown creature feature. (Will go more in-depth on this in an upcoming post.) Fincher leads with this, illustrating Gone Girl’s mid-story twist with such exhilarating, frightening urgency like the entrance of a movie monster. Amy’s ingenuity isn’t that she’s secretly a murderous psychopath hiding in plain sight. It’s that she’s an alien wearing the skin of a human being. The movie’s last frame remains the most blood-curdling imagery Fincher has ever concocted – a closeup of the phenomenon in its final form. No, not a monster anymore. A black hole.

2 thoughts on “The Psychopaths of David Fincher”

📺 THE VAST OF NIGHT